An excellent question was raised at the Tiverton Literary Festival crime panel yesterday. It's one which I've heard before, but never really managed to find an answer for...

It was this - Why is crime such a popular genre amongst readers?

Good question, very good point. After all, in our real lives we very much don't want to be involved in crime, do we? Yet we're so keen to read about it, often in all its gory horror.

The answer came to me in an analogy while I had a rapid think. I'm not sure whether this is me thinking, or in pain, but it's a taste of what the session was like - 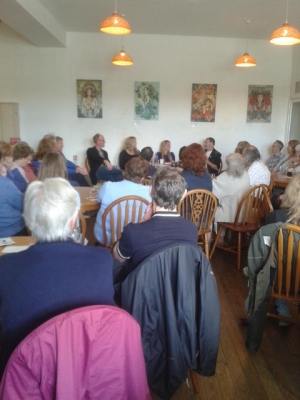 I saw it like this - imagine you're driving along a motorway and there's a crash on the opposite side of the road. We know we shouldn't, but who of us doesn't peer over for a look at what's happened?

I suspect it's just the same with crime. We might not want to be involved in it, but we're still curious and want to get a sense of what it's really like.

But from a safe distance of course - whether it's our armchair, or the other carriageway.

That's my new theory about the fundamental appeal of crime, aside from the battle of wits between the good guys (and gals) and bad, and the challenge for a reader of trying to work out whodunnit, and why.

Finally, thanks and hearty congratulations to Tiverton for having the courage and spirit to put on a literary festival. I know it's a huge amount of work, but I sensed it was a great success, brought a real buzz to the town and I hope to see it return next year.

I very much enjoyed my time at the festival, and I know the people who came along did too.