For the first time in my life this week, I went viral.

I was covering a story about some young lads in Devon who wore skirts to school in protest at not being allowed to put on shorts in the recent heatwave. 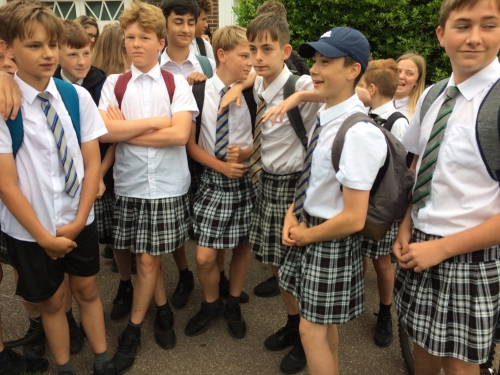 That evening, after this picture had been shared around the world, and I received tens of thousands of responses, I wondered why it had made such an impact.

And I came up with a familiar reason.

It's all down to people and pictures. The same combination that's been fascinating the public, and selling books and films, plays and dramas down the years.

People as in characters. And look at the great mix of characters in the young lads. The thinker, the joker, the rebel...

Pictures as in the story. Whether it's shown on a screen or left to the imagination to create from the writer's words, it all comes down to the same.

We love a good story. And we delight in interesting people.

All that was summed up in one split second in one single photograph.

And with it was a lesson for writers everywhere.

Get the pictures - the story - right, and the people within it, and all else will follow.

And one further thought for this blog. I'll wager you two bets now -

1. That picture will make it into more than a couple of best man's speeches in the years ahead.

2. Some of the lads in the image will go on to become writers, or join other creative industries.

And they'll be very welcome. Because they're just the type we need for the future.