Liberty, Heroes, and a Trio of Thoughts

I got to meet my hero this week.

I happened to be at BBC HQ in London, with the radio comedy unit (it's an ambition of mine to write for them, if I can work out how to be funny) and there he was outside, keeping an eye on the visitors. 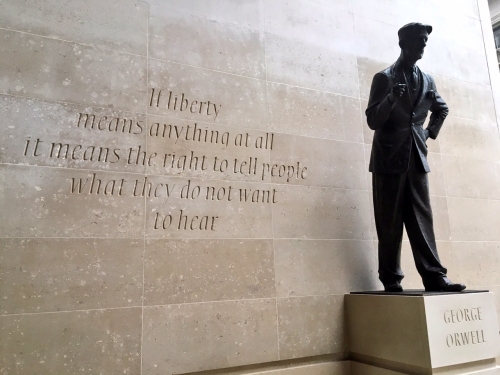 Ok, I know he was beyond a proper meeting, but even some time with your late hero can make you reflect on why they mean so much to you.

The quotation was well chosen, I think, for the entrance to an organisation which lives by free speech.

And as I stood there, thinking, it occured to me that it was Remembrance Weekend.

When we honour those countless millions of men and women who died for our freedom today.

(Who are also heroes of mine, incidentally. And before anyone starts talking about the horrors of war, yes, I agree.

War is horrible beyond words. But when all our lives are threated, and our way of life too, the brave stand up for liberty.)

Then, on the train home, came part three on my trio of thoughts.

I was reading a newspaper, which contained a story about no platforming (the practice of denying people whose lawful (if highly distasteful) views a certain group disagrees with from being allowed to speak).

It's something which has been a great concern to writers and journalists, and understandably so.

And there was George Orwell, like a true visionary, standing up with an answer, dozens of years before no platforming was even invented.