I've always loved libraries, but this week I found even more reasons to treasure them.

I was asked to open the new library in Bodmin, Cornwall, which I very happily did - 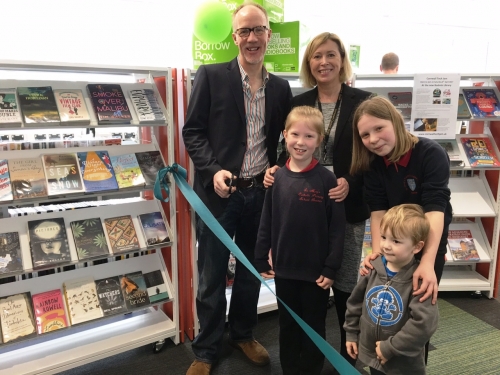 And two things happened which made the day extra special -

A couple I recognised made a point of grabbing me for a chat. They'd made a special effort to be at the opening, and I quickly found out why.

They'd come along to an event I did about a year and a half ago when I'd spoken to their daughter, Alex.

She wanted to start writing a book, but didn't know how you could possibly manage to put together a hundred thousand words, ie. one of the normal concerns budding writers struggle with.

So I gave her my usual advice -

Every year, when you get to December 31st and look back, how fast do you feel the year has passed?

They wanted to thank me, because Alex had just finished her novel, and was delighted by it.

That was a buzz enough. But then I was hit by another.

A librarian told me she had been at a writing workshop I did a few years ago in Barnstaple, north Devon. The idea was to encourage some of those who came along to start up a writers' group.

Which, she told me, they had.

And even better, it went so well, that group gave rise to another three.

By this point, I was getting dizzy with delight.

That's one of my favourite highs of this writing life - the legacy you can leave.

And as all good things are supposed to come in threes, take another look at the picture, above.

That's a new generation of readers and writers, right there; youngsters who will come to treasure libraries, and the joy of words, thought, feelings and imagination.