But one I come back to time and again, because it's so worth it.

I've been in London for a reason I'll explain in a minute, and I happened to walk past what I've now come to think of as a metaphor for the week. 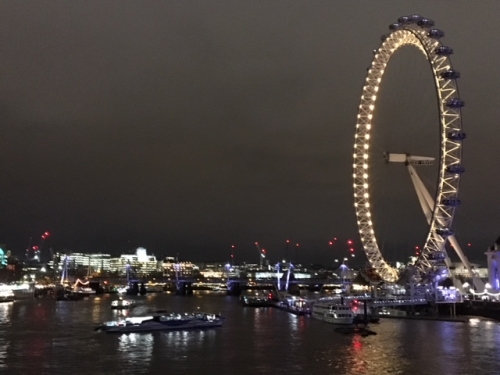 It's the job of a big wheel like the London Eye to keep on going whatever.

And that's such an important lesson in life.

This week came news from a writing friend -

She had what I've always thought of as a great idea for a book. She's a terrific writer, very strong on characters, settings and stories...

But she suffered the traditional fate of any fine scribbler.

She got turned down by publishers, had hassles with her agent, lost her confidence, began to doubt herself.

In brief, all the usual agonies we humans go through.

It was a long journey, lasting for many months, as she struggled on, refined her work, again and again, and kept trying -

And this week came the offer of a publishing deal.

As for me, about eighteen months ago, with a good friend, I wrote a radio comedy.

We liked it lots (you know how I've always thought I'm funny, despite the evidence to the contrary.)

We polished and honed, then pitched it to various companies and got... nowhere.

So the evil thought inevitably starts to whisper -

Maybe it's time to give up?

JK Rowling got rejected, so did The Beatles, Agatha Christie had years of it, and so many others.

And did they give up?

So we kept going, kept pitching, kept the dream alive, and this week a radio producer said how much they liked it and asked to meet up to discuss the series.

Ok, there's a long way to go before it's a hit - that's both my comedy, and my friend's book.

At least we're in the game, and doing ok at it.

Because we never gave up.