I love quirks, whether in writing or life. They're so human and so Planet Earth.

This weekend, I was privileged to witness a wonderful quirk - 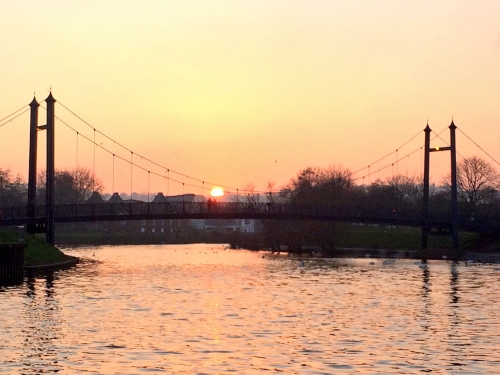 Twice a year, in spring and autumn, the sun sets directly along my beloved River Exe - with spectacular effect.

The planet is full of quirks. Whether it's the three dashes of grey between the wings of my favourite goose, a double rainbow or the occasional four leafed clover.

And naturally, we lucky travellers on this amazing spaceship take on quirks of our own. It's part of what makes us individuals.

I can't bear having the sleeves of my shirt done up - it makes me feel constricted, almost caged.

(And an occasional brackets habit.)

A writing friend only ever uses green ink in notes. Another has to vary the places they write, from pub, to cafe, to restaurant, to keep refreshing their creativity.

My idiot hero Dan has a watch which never keeps the right time. His detective friend, Adam, has a tendency to straighten his tie when an investigation is running his way.

We're a quirky species, on a quirky planet, doing our quirky thing, and bless that. It makes life so much more interesting.