Writing can bring a major occupational hazard in the way authors may appear to the world.

Last weekend I was sitting happily in my local inn, thinking about the plot for a new book and making some progress, which was a joyful experience.

As often happens when the muse is kind enough to visit, I got lost in myself.

Only when I finally looked up from my notes to see various faces staring at me in a curious / quizzical / amused / disconcerted / plain alarmed fashion did I realise what I'd been doing.

Apart from a whole load of daft facial expressions, which wouldn't be out of place in a bad bedroom scene, I had been emitting a concerto of sound effects, from ooohs and aahhhs, to yes! and no, no, no, no, no, aha! etc...

And that wasn't the worst of it.

I'd imagined a key scene in the book, one which would be both powerful and emotional (hopefully) and was talking it out between the two characters.

Which involved... shifting my position from left to right for each of them in turn and mouthing the lines they might say, to try to get a feel for it.

I've done this sort of thing before, and really should have learnt by now. At a craft fare, I got myself photographed because I wanted to see whether a daft hat might work as a disguise or just end up drawing more attention - 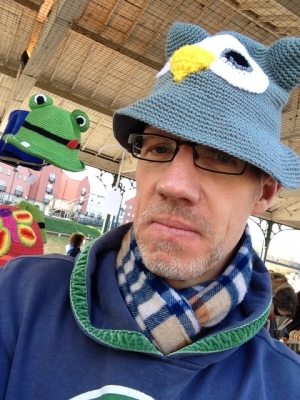 (Draw your own conclusions as to the answer.)

Anyway, happily I'm fairly well known in my local, so no one called the police. I could imagine people whispering to each other, "It's ok, don't worry, he's a writer."

On the whole, it's good to get so immersed in our writing that we forget the world.

But occasionally it's not a bad idea to remember ourselves and pop back to planet earth, if only to reassure our fellow citizens they're not in any danger from the strange person in the corner, muttering away to themselves...