Ok, I might be exaggerating a tad here (how very unlike me, eh?) - we're not quite talking an intro like the fireworks that started the universe.

But... it's my own humble little version.

A lovely oportunity came my way this week, but also quite a challenge.

I was invited to the excellent Exeter College to give an inspirational and aspirational talk to some of the students.

That's kind and flattering, thank you, but here are the issues -

Firstly, I'm talking to 900 of them. Yep, that's NINE HUNDRED. Ie. almost a thousand. Ie. lots and lots and more lots. Which is a little daunting.

Secondly, they've just sauntered back from six weeks of happy hols to dull old school. So they're not in the cheeriest and most energetic of moods.

Which meant, I reckoned, I had to grab them quickly with what I would say, or they'd be yawning, nodding off, or on their phones. 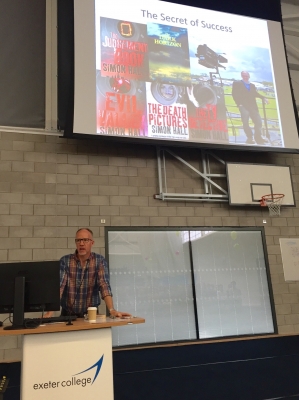 And started the talk by asking, "Who would like to know the secret of success in life?"

Hey, it worked. They actually listened. I think I managed to shift the mindset of the hundreds of assembled da yoof from, Hell, as if being back at college isn't bad enough, we have to listen to this dull old crusty buffer as well...

To, Maybe I will just listen 'coz this cool dude (not sure I'm down with da kids' yoof speak, but whatevers man) may just have news for me...

It all reminded me of the importance of a strong opening. Whether in a book, talk, job interview or anything.

The old adage about first impressions counting is very true. Get them right, and you're well on your way to success with whatever you're doing.

And finally, no I'm not telling you the secret. At least, not yet.

That's the end of the story. And another blog, when we get onto to compelling conclusions...