What is writing for if not to journey through the feelings of life? But that can be so darned tough.

I lived a moment of pure joy this week. You know I'm more than fond of the gang of daft geese who live on the River Exe? Well... 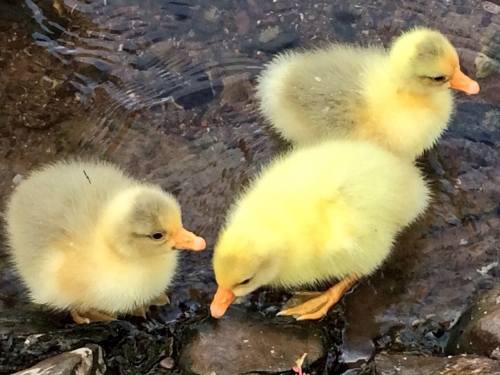 I didn't think we were going to have goslings this season. It was getting too late in the summer. And then I walk around a bend in the river and... oh, wow!

I must have taken several hundred photos and just sat there, on the riverbank, watching them for ages.

I worried about them, of course. They're so vulnerable, and life on the river is tough. But come the next morning, they were all still there.

And I did some more delighted gazing and gibbering. Which again went on for quite a while.

Until one was killed by a swan. Right there, in front of me. In just a second's arcing of its long white neck, and a clamp of its beak.

I couldn't believe it at first. It was so sudden, random, pointless and violent.

And yes, when it hit home, I did cry.

And isn't that strange? With all the dreadful things I see in my journalist days, the horrors that humans can inflict on each other, I get so upset by the loss of a gosling.

I did wonder whether to write about it today. But I decided to, firstly, perhaps bizarrely, because...

I wanted some little marker, some thought, a memory of that tiny, squeaky ball of life.

But also because it made me think of the essence of the art of writing. To try to capture the world, and all the feelings that pulse within it.

The highwire is the pinnacle.

But the trouble with being up there, flying in the sky, is that it's a long way to fall.