The Inside Out Impact

It's scary and hard, probably one of the toughest things to do in life, but it can be so very powerful.

I was reminded of its impact this week, when I did a talk about careers in the media at the excellent Park School in Barnstaple, north Devon. 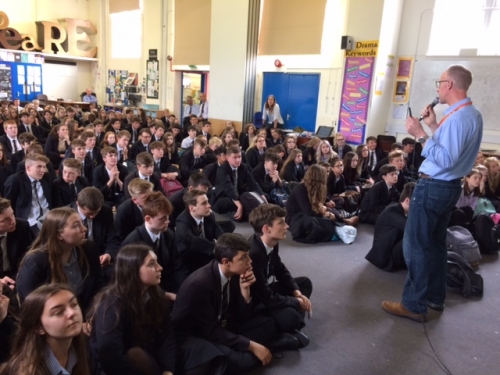 There's a story I sometimes tell and sometimes don't, depending on the group and their mood.

But this day I told it. Probably, I think, because of the dreadful attacks the country has suffered in recent weeks.

I suspect it was also partly because earlier in the week I was speaking to a friend who had done something very brave.

She'd suffered tough times in the past, so bad that she considered suicide. And not just thought about it, but actually stood there, on the edge of a bridge, balanced between life and death.

Since those terrible days she's gone on to success and happiness in life, I'm delighted to say.

But then came one hell of a request. She was asked to tell the story of what happened to her, in a very public talk.

After some agonising, she did so. And for all the right reasons.

To let others who are suffering know they're not alone. And that the world can change for them, as it did for her.

The reaction was extraordinary, from both the audience, the media and the public. She touched so many people and I believe did a great deal of good with that wonderful, light in the darkness message.

My own version, the story I told the youngsters at Park, was of being sent into London to help cover the 7/7 attacks, the first suicide bombings Britain has suffered.

The horror of that day, the sense of the world changing, an assault on the very fabric of our society. And what it was like to feel that, all around.

Like my friend who stood on the bridge, it's a memory I hold deep within. Only to emerge when the time is right.

Like to tell the young people around me that despite the horror of the terror attacks on our country, there is still goodness and hope in the world. And lots of it.

The way communities pulled together. How we carried on with our lives, with freedom, friendship, love and support. How hatred would never be allowed to win.

It's hard, letting out that which we keep deep inside.

But sometimes it's necessary.