The Socks and Pants Rebel

I've been a rule-breaking rebel this week. Prepare to be shocked.

I've also clocked up a claim to fame. I think I might have become the last person to get banned from British Home Stores.

You'll know about the sad demise of BHS. How it all ended at 4pm on Sunday, after 88 years on the high street, with every last store shutting down.

Moments of change are what writers live for, so I toddled into our branch in Exeter, mainly to share sympathies with the staff.

Ok, I haven't shopped there since I was about seven, getting socks and pants for school days. But nostalgia can be a powerful thing.

I thought I'd take a couple of melancholic photos, to mark the moment...

And was descended upon by a security guard saying there was a no pictures policy. If I persisted, I would be banned.

Well, this was ten to four. The company had 600 seconds left of life. So, like a true rebel.. 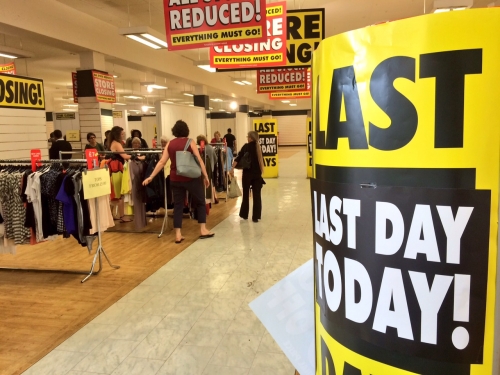 I kept snapping away... and was told, and banned!

What a rebel, eh? The man knows no fear. Life on the edge, and how.

Apart from making me chuckle (a lot), this hair-raising, no holds barred, adrenaline-fuelled escapade reminded me of an important lesson for writers.

You don't have much success in publishing with a hero, or heroine, who follows all the rules. Where's the drama in that?

You need someone who's not afraid to risk life and limb, take their very existence into their hands, the highest of stakes, to make for a compelling story.

I can just see my new novel now. The Socks and Pants Rebel...