In my BBC days, I often used to get asked - what's the secret of your success?

The questioners meant in breaking big news stories, getting access to remarkable events, and securing interviews with people who didn't usually talk to the media.

That made me think, and I came up with an answer which was so simple I couldn't help doubting it.

But, after looking at my colleagues' ways of working, and talking to the people who were kind enough to help me with stories, I realised it was right.

I've been in Cambridge for a year now, and the same approach has served me well here.

What is this miracle strategy, I hear you ask?

It's talking to people. And I mean really talking.

Actually, properly communicating. Which means meeting them in person.

I told you it was simple. But still it causes surprise.

When someone gets in touch, enquiring about me doing some work for them, it's nearly always via an email or my website.

And the first thing I suggest, in my reply, is that we get together for a chat over tea or coffee.

Which, apparently, is something most people with a service to sell don't do.

Instead they "communicate" via email, or maybe a phone call.

That's not communicating. That's exchanging information. Which is very different.

Communicating is sitting with a person. Exchanging human emotions, like smiles, and frowns, and gestures, nods and shakes of the head.

Getting a sense of each other by how we dress, and speak, and our body language, and that indefinable, but oh so important, aura that everyone gives off.

Ok, sometimes getting together in person isn't possible.

But at least you can manage a video call, as that establishes some kind of a rapport.

For a successful relationship, hopefully ongoing, there's nothing like a face to face, in person chat for true communication.

Finally, would you like to see some beautiful proof of that?

This week was one of the most emotional of my life, as my daughter, Niamh, joined Sandhurst to begin her training as a British Army officer.

Saying goodbye to her was a moment which words could never do justice to.

But in the crowd of Mums and Dads, and other family, was a military photographer, who captured this wonderful moment - 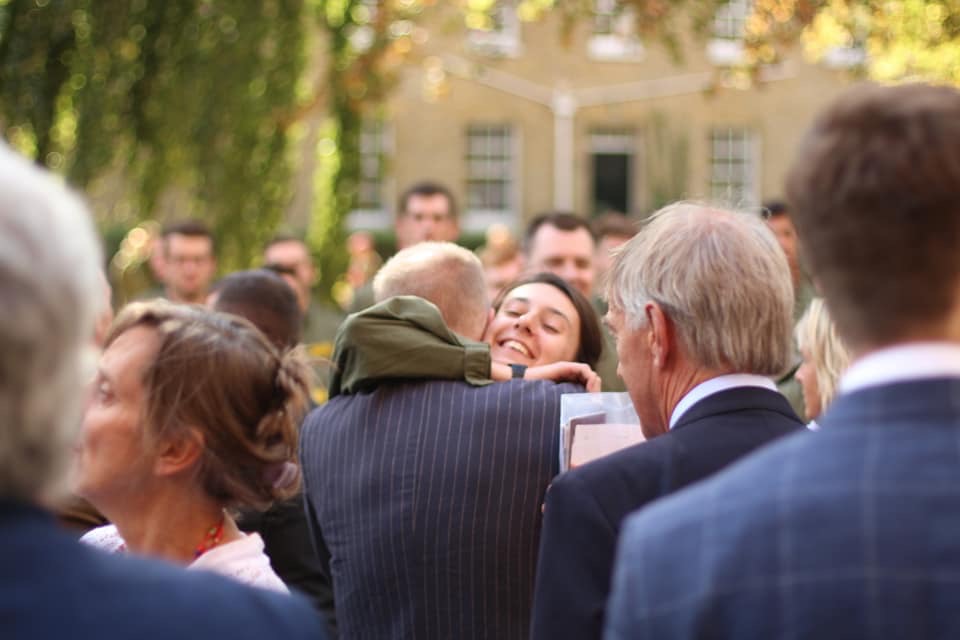 You try conveying feelings like that in a phone call, or via an email.

The in person way is the only way when it comes to true communication.